Every writer needs a happy writing place. And if we don’t, that is often the prime excuse we make for not writing. My computer crashed and I lost all my files is a good one. My significant other and I broke up works. Hey, I had to walk the dog. The baby is teething. The line at Starbucks was like, you know, around the block. Okay, and the dog ate my flashdrive – this may be a reach. Although my daughter’s dog did eat my passport.

I am sure you have your own stash of rational, perfectly believable excuses for not writing.

Back in the beginnings of my writing life, I lived in LALA Land. Coffee and the NY Times at the famed Farmer’s Market on Fairfax Avenue every morning from 8am til lunch time was the perfect excuse to put off writing.

My observation, as a young fledgling writer: not a lot of writing was getting done at the Farmer’s Market, but it seemed a necessary ritual.

The excuse? Well, you had to be in your special space to write; your desk, your typewriter [yes, typewriter] your legal pad and special pencils, your room, patio, balcony, garage, cubby, porch, alcove, your chair, the light just right. All the elements of the Universe would have to align before the “genius at work” could actually work.

At the high end, the “Top of the Mountain” of my happy writing places for 20 years was simply called “The Barn”.

Located on 5.5 acres in Pound Ridge, NY, the barn was moved from Napa Valley in the 1930’s by architect Hiram Halle and reconstructed on the property. We moved there in 1994 on the wave of Hook and Dracula. I found my dream happy writing place. Every season was magic. I was surrounded by nature and great golf courses for therapy. But what I did here was write.  5am sunrise, till 1am and the Milky Way.

Actors, directors, and writers such as Eric Jensen and Jessica Blank [Exonerated, Aftermath, How To Be A Rock Critic] workshopped here. Director Jay Russell visited the barn while collaborating on Tuck Everlasting. Pulitzer Playwright Ayad Akhtar [Disgraced, Junk] workshopped the first controversial film about a terrorist bombing in NYC here at the barn with writer/director, Joe Castelo and Ashley Ruden.

Amanda Welles and I wrote and created Crossbones, among others in the barn.  Epic: Legend of the Leafmen was developed in the barn with author illustrator academy award winning director Bill Joyce and Ice Age creator/director Chris Wedge.  Many a sword fight was re-enacted outside in the gardens.

I wrote Jack and the Beanstalk: The Real Story for Brian Henson and the Henson company here. August Rush, The Last Mimsy, Lara Croft: Tomb Raider, Sahara, Tuck Everlasting, and many more still in development, were all products of my Happy Writing Place.

There was definitely alchemy at work here. I finally discovered a truth about the barn when we sold the property in 2014. During the open house, a sister and brother who had grown up in the house and barn visited and entertained us with stories and facts about the house, and especially the barn.

Gulp. I did not have a clue.

Turns out that in the 1950’s Hitch himself would arrive in a big black sedan and walk down to the barn where author, Evan Hunter [Blackboard Jungle] was writing the screenplay for THE BIRDS!

In my barn!! THE BARN! No wonder the energy flowed. The story goes that Hitch convinced Hunter to move with his family to LALA Land to work on the film. Then fired him.

And then the property sold and the barn was gone. My happy writing place cleaned out and vanished. Another sanctuary lost. Just like the house on View St. in Ft. Worth, Texas and the desk my father built then I was 10. 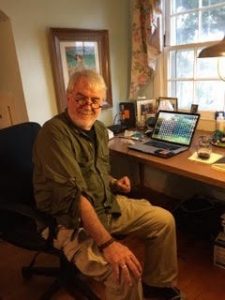 My dad built a two-story Cape Cod house in Texas in the 50’s which were non-existent at the time. The view from my desk overlooked 180 acres of Texas hills that could never be built on. I wrote my first stories here. Filled out my first tax return. And after the kids were born and we summered here with my parents, I typed “the end” on Hook here. Worked on Dracula, Contact, Atlas Shrugged, Muppet Treasure Island, Sahara and Crossbones in this special place. Also wrote my love poem to Texas here; an unproduced screenplay called “Restless Hearts.”

I loved coming to Texas and hiding out writing in my room into my late 60’s. After my parents died, I had to sell the property and say goodbye to another happy writing place. A true sanctuary full of family memories and ghosts of summers past.

And finally, in the hall of fame of happy writing places, THE CORNCRIB, a precursor to the barn, located in West Camp NY on the Hudson River where the kids were born, took their first steps, learned to play baseball, build snowmen, drank in MGM musicals on video and I became a paid professional writer. 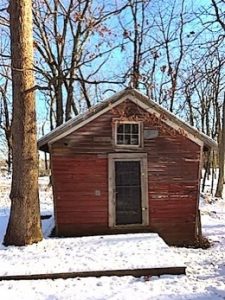 I needed a sanctuary as the kids were young and wanted to play all day, and those of you who know me, would understand that I would willingly oblige.

The crib was 9×12. Had been a dog house, and was full of big brown Recluse spiders, ants, bugs, an occasional snake, but it had power and my old desk fit, and it was mine. A telephone line was added and a space heater and boombox. No TV and no such thing as wifi in the 1980s.

To make a fun story for me shorter for you, I wrote the first script I was ever paid to write in the crib; “Gimme ‘N F!”, about my male cheerleader days, which was made into a bad girly dance flick that has a cult following. But, hey, I got paid and got produced.

I also wrote Contact and Muppet Treasure Island here in record snowfall. Brian Henson and his colleagues spent snowdays here working on the script. The crib served me well and was a happy place to write in winter, spring, summer, fall, with frequent visits from Jake and Julia [who now have writing/directing careers of their own] to come play or later to ask “how’s the script coming, Dad?”

And, they named our street after us. Hart Rd! 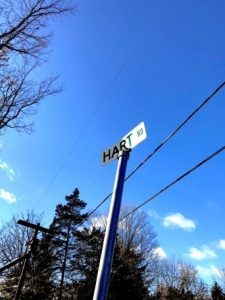 With each sanctuary and happy writing place I left behind, I was convinced there would never be another.

And then, after saying a woeful goodbye to THE BARN, the Universe spoke [insert Morgan Freeman voice here]

Like dear Mate and Friend Bob Hoskins said in Hook, “I just had an apostrophe.”

In fact, my happy writing place has become the world.

Any coffee bar within 2 miles of Studio/Network offices is full of writers, writing, prepping pitches, having story meetings. There are sanctuaries and happy writing places everywhere that essentially eliminate your ability to make lame excuses about not writing.

I bring pics of my former happy writing places with me everywhere to channel that energy. And yes, I do have 2 permanent places I do like to write in; our apt in NY. My office is full of barn memories, and a cottage a dear friend allows us to stay in when in LA.

And, for the record, I have written this post flying at 36,000 feet, heading from NY to LA in my flying barn!