An invitation to any film fest is a call to action in Joseph Campbell speak, so to speak. But a hero’s journey to another country to attend an international film fest is an opportunity you must find a way to take.

Never mind the tsunami of weird, cool, challenging, inspiring, mind fucking films offered in different languages, the reason to attend these global gatherings is the people and characters you will meet who share your love for film and the craft; writers, directors, producers, financiers, agents, DPs, SFX wizards, actors [actors love film festivals].

Attending the panels and one on one interviews is essential, but the real networking is at the parties and in the bars between and after events. You will most likely end up having a drink and sharing war stories with a writer/director/actor/producer/animator/executive etc., you would find impossible to meet through normal industry channels. And then, keep in touch. Career opportunities are born in this kind of environment.

But the single most important reason to attend film festivals is:

And Co-Existence is the only hope we have to survive as a species on this planet.

The Arts will save us.

The multitude of cultures, ethnic origins, languages, religious beliefs, types of governments, genders and gender preferences, that attend film festival come together celebrate and create, not to ridicule, insult and destroy.

The Shanghai International Film Festival, June 15 – 22, 2018 is a perfect example. I was invited by the sponsors of the Drama Flagship Hollywood Salon, and Hollywood Embassy, a Chinese and US partnership to promote screenwriting in China; my topic — to speak on the importance of script development in the filmmaking process.  I immediately accepted for all the reasons stated above and because, based on my bumpy experience with 3 separate China based development deals, I felt I could certainly address this need.

However, when I arrived in China, I was disturbed by the front page headlines in South China Newspaper [English Version]; “CHINA AT WAR WITH UNITED STATES”. I am entering a host country that my homeland started a war with and China prepping to retaliate. A trade war mind you, but not a good start.

As I rode to the venue through the streets of the amazing city of Shanghai, I saw no anti-American protests or signs. Just plentiful signs and colorful banners in celebration of the SIFF.

And then, being introduced at the Screenwriter’s Salon [located in the impressive original Russian Embassy compound] by one of my hosts, Nathan Boyd, there were no boos from the audience. No insults and denigrating catcalls.

But rather, a warm applause, and some even stood up, which is not normally behavior in the Chinese character. Even audible cheers when I dropped the newspaper on the floor and stepped on it. I can do that in our country. They cannot. 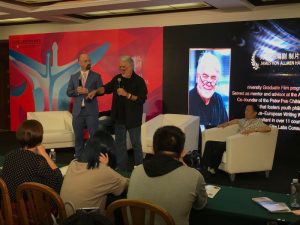 When I asked about our countries going to war, they were puzzled. When I posed the question, the replies from the audience answered with questions; “How do we develop a script? “How do we get our writers to write good characters?” “What are the elements a good screenplay has to have?”

The subject of our countries being at war was simply just not remotely relevant inside that room and with these young writers and executives and directors and producers.

The only force governing this gather of international devotees of film was the creative force.

Tear down you destroy.

I have always believed that if you put children of all origins, ethnic, language, country, religion, etc. in a big room full of stuff; crafts, paints, colors, paper, clay, costumes, musical instruments, cameras, tablets, computers, etc., and just left them alone, they would transcend all their differences and create a group project that would reflect their differences and, more importantly, how very much alike we all are in manifesting that outward urge to create.

That is because our species is blessed and cursed with the power of the imagination.

The imagination is where all art and art forms spring from.

We can use our imaginations to create, or to destroy.

I have never attended a film festival, theater festival, gallery opening, music concert, or workshop that was organized and executed for the purpose of destroying the art form, or the culture, or the industry, or the people who thrive on it.

I was very honored to participate in the SIFF this past June. I made many new friends an “WECHAT” acquaintances [the connective tissue of choice in China]

I viewed a young Chinese filmmaker’s feature, Transcendence, which even my Chinese friends did not understand but were dazzled by as was I.

My hosts, Mr. Cheng, Mr. Wang, Mitchell Peck, Nathan Boyd, and Bruce Cap, provided amazing food, hotel, air travel, and great conversations about life and art and our commitment to working together in the future to create – not destroy.

While there are common aspects to all film festivals, each has a distinct difference and character, based on the country, the city, and the people and artists you encounter.

Enter your short films, enter your features, enter your scripts, sign up for those panels and pitch sessions, and join the creative future. It is one future that thrives on the imagination and creation.

Brain blizzards to you in your creative process.

Written in my fave writing space, flying at 36,000 feet over the Atlantic heading home. 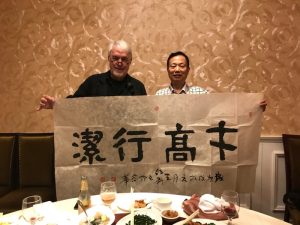