At 9pm EDT on May 27, Memorial Day eve, The Hot Zone, a 6 part mini-series premiered, based on Richard Preston’s terrifying 1992 article in the New Yorker, “Crisis In the Hot Zone”, and his even more terrifying 1994 book, The Hot Zone, introducing the unsuspecting public to the deadly pathogen, Ebol, finally aired.

This lethal filo-virus killed thousands in Zaire, Africa in 1976, and showed up in the U.S. burning through a monkey population in Reston, VA. In 1989.

The presence of Ebola on U.S. soil fueled a quiet panic among virologists and scientists at the CDC and USAMRIID at nearby Ft. Detrick, Maryland. A secret under-the-radar operation to destroy the monkeys and contain any human exposure or outbreak of the killer is put into motion. If Ebola spreads to the human population, thousands could die horrible deaths, as there is no cure and no vaccine. These true events and the true-life heroes who risked their lives to protect our unsuspecting species is the engine that drives the story of The Hot Zone.

Ebola, according to legendary virologist, Karl Johnson, who discovered the pathogen, could be the “slate wiper”; nature’s revenge against humankind that will take us out – all of us. And it is still with us, killing over 12,000 people in the 2015 outbreak in Africa. And a new outbreak is in the news even as this much-anticipated series is airing.

So what does all of this have to do with this writer?

Turns out the story of the story has its own twists and turns – or in HartChart parlance, its own dramatic Signposts.

In 1993, producer Lynda Obst [Contact] brought me onboard to work with Richard Preston to adapt his 28 page New Yorker article into a feature film. This was an assignment coveted by the biz top writers, and it was a huge opportunity for this writer having just come off writing Contact with Carl Sagan, thanks again to Lynda Obst. 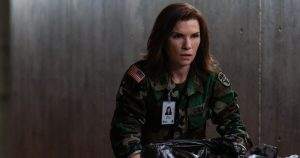 For the next several months I met with the unsung heroes of USAMRIID [United States Army Medical Research Institute for Infectious Diseases], code for Biological warfare prevention. Lt. Col. Nancy Jaax, the hero of the Hot Zone, and her husband, Colonel Gerry Jaax, shared family and military tasks and experiences openly, as did Dr. Peter Jahrling, a civilian pathologist at Ft. Detrick, who are at the center of the scary events in the U.S.

The highlight of all this research and expense, which was graciously supported by the Studio and the Producers, was traveling to Wyoming to spend several days with the legendary field virologist, Dr. Karl Johnson, and his wife Merle [they met and fell in love during an outbreak] Karl was at the epicenter of the outbreak in Zaire in 1976 and was an eye witness to the horrors

and ravages of Ebola as it burned through villages killing thousands mercilessly. Karl’s vivid recollections and tape recordings of field reports to the World Health Org of the horrible decimation of human life he was witnessing went right into my outlines and first draft screenplays.

I felt a huge responsibility to portray these legitimate heroes with respect and accuracy as they entrusted me with intimate details of their lives, their fears, and their hopes and dreams. All the stuff characters are made from.

For instance, the Jaax’s admitted to me they feared for their children if either Nancy or Gerry was exposed and brought the killer virus home to their children; one child, their daughter, was training to be an Olympic gymnast. None of this information appeared in Preston’s article but it went right into the screenplay as a powerful element and defined Nancy Jaax’s character.

She and Karl Johnson never met and Karl never was part of the euthanizing of the infected monkeys at the Reston facility. I created a fictional mentor relationship between Karl and Nancy that survived 17 other writers, including the series showrunners and staff writer, as the core relationship in the series. All the events were true, as were the real true life people we populated the screenplay with.

Signpost #4: TOP OF THE MOUNTAIN: GREENLIGHT

I turned in my first draft in August of 1993. The studio greenlit the draft; Jodie Foster signed on to play Nancy Jaax, with Ridley Scott to direct. I was in screenwriter nirvana. With input from Ridley and Jodie, my second draft snagged Redford in 1994.

Preproduction began when I learned through the grapevine the studio was seeking other writers.

The first draft greenlight, major director and major stars, and I was being replaced. Welcome to Hollywood. I was also replaced on Contact by two other writers and still ended up receiving first position screen-credit. The same thing happened on Hook, and again, I received story and first position screenplay credit. This was becoming alarmingly routine in my career, and I will never get used to that when the stakes are high, directors or lead actors feel the need to hire their own writers.

Another writer was hired and there was now a race to get to the first Outbreak themed film against Warner Bros. — starring Dustin Hoffman and…..Redford? Yep. He was being pursued while having me rewritten off the Hot Zone.

Signpost #6: A CINDERELLA MOMENT – BACK IN THE SADDLE

A month later, while on Spring Break with our kids in Florida, I received a phone call from the President of the studio asking me to come back on the project – why? Because I knew the characters better than anyone, and the story and structure I delivered was what they wanted. 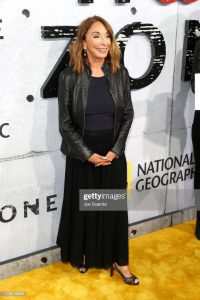 So I returned to the Hot Zone for another draft, was replaced again, brought back again, and again replaced.

The script moved further and further from my original portrayal of Nancy Jaax and Karl Johnson’s fictionalized mentor relationship to a more romantic one, which prompted Jodie’s exit from the project. She, instead, attached herself to Contact [ironically at Warners] which was on a fast track to production. Hot Zone’s loss, Contact’s gain, and ultimately not bad for this writer. Another strong female character I had the challenge and pleasure of crafting.

Jodie leaving the project was our structural Point of No Return signpost. Irrevocable and undoable.

Redford was now in control of the Hot Zone project. Warner Bros announced the start of production on Outbreak with Dustin Hoffman to put pressure on Hot Zone. With no satisfactory replacement for Jodie, the studio pulled the plug on the project after spending millions on the material and pre-production.

Outbreak opened in 1994, and the Chairman of the studio called to tell me they had pulled the plug on Hot Zone for the wrong movie. Ugh.

Richard Preston’s nonfiction book was published in 1994 and was an instant best seller.

Not a satisfying ending by any measure of the signposts on the HartChart.

Every year since 1995, people would ask Richard Preston and me why don’t we make Hot Zone. Our reps’ position was the project was dead and there was too much money against it to move it to another studio. Then the world of television beckoned. Binge watching was in. The tsunami of content rushing to TV was a wake-up call. Preston’s book was perfect

for a series and was still a top seller. Richard and I had tried several times to come up with a fictionalized outbreak scenario, but always we returned to The Hot Zone. Obst had tried to resurrect the feature with other writers but failed.

Knowing my precarious position as a writer who had been replaced by Obst on Contact and on Hot Zone, I went to studio myself to the head of television and pitched him a limited series based on Preston’s book and my screenplays. The studio could recoup some of its money and deliver a long-awaited dramatized version of Preston’s brilliant real horror scenario to the new hungry TV audience.

Sadly and timely, another outbreak occurred in Africa in 2014-15 which made the studio’s decision all the more important.

Signpost #9: THE SATISFYING ENDING – “CREATED BY”

This is the “never give up” part. So after resurrecting the project and witnessing a carousel of writers and showrunners contribute to this project, it’s not surprising there would be questions about who wrote and contributed which bits. Fortunately, in our industry (and thanks to the work of titans like writer/director Frank Pierson) writing credits are determined by the Writers Guild of America members. And, if there are any questions, professional writers, who are our colleagues, volunteer personal and career time to read exhibits from all participating writers who contributed material, to arbitrate and determine the final writing credits as they will appear on each episode. 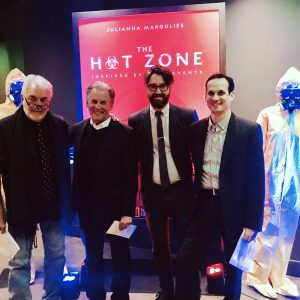 For Hot Zone, three WGA Arbiter/Writers were assigned to arbitrate each episode; 18 writers in all read exhibits selected by 9 writers all seeking credit on one or more episodes. The Arbitration began in April of 2019 with airdates set beginning Memorial Day in May, so the pressure was on the Arbiters to render decisions no later than May 9, 2019.

Silence is a killer. The suspense, if my work would even be recognized, was agonizing. Especially after reading the episodes and recognizing my work from 25 years ago still very present throughout.

On April 25th, at an altitude of 36,000 feet, I received an email from the arbitration supervisor from the WGA asking permission to disclose the results by email since they could not reach me by phone. Whoa – 25 years of waiting and willing this project to be real. Nobody on the full plane had a clue of the drama taking a plane in row 6F. No one to talk to. No one to share this moment with. Good, bad, or ugly.

What showed up on my laptop display a minute later literally made my heart skip several beats.

“Teleplay by James V. Hart and NAME OF OTHER WRITER”

And even “Written by NAME OF OTHER WRITER and James V. Hart”

Episode after episode delivered the impossible. The work I did 25 years ago and in 2014 proved up: Character dramatization, narrative structure, and new and original scenes had withstood all other subsequent writers for 25 years.

As for this writer, I have chosen to go with gravity for the last 25 years and let gravity take me with the Hot Zone to his moment. I succeeded without bucking gravity, without kicking and screaming. I just let the words I had put on the page be my champions, my armies, my guardian angels, my truths.

EPILOGUE: INCLUDE THE AUDIENCE

A key tenant of the Hartchart is to consider the Audience as we write; what do they know, when and how do they learn/feel about that? Interestingly, in the week since the first episode aired, it was amazing to see the ways in which audiences are making this story their own. As the Twitterverse is humming with viewers sharing their very personal and visceral reactions to what they are witnessing the virologists experiencing in the series. Memes and hashtags are adding dimension to this event in ways chart we could have never dreamed of 25 years ago.[@The Hart Chart, FB HartChart, Instagram HartChart]

Though we could have not have predicted this in 1993, as it turns out, this story was made for 2019.

Trust the signposts in your very own story.

Brain blizzards to you all!