What we write in the past lasts and has an after-life that impacts the future.

I experienced this in real time the last week of 2019 during a late-night writing session. The Hot Zone and Contact aired on different cable networks nearly back to back.  I had to watch because of the unique serendipity of it all. I wrote the screenplays for Contact and The Hot Zone back to back in 1992 and 1993. And here they were, back to back, 25 years later, still reaching an old and new audience. I wondered how many writers have this shared experience. A true bliss hit and prompted the many memories connected to this writing life.

I had spent quality time with Carl Sagan and Annie Druyan while writing Contact, which inspires me to this very day. The rarefied air I shared with the Sagans happened because I am a writer. No other reason. The note that Carl and Annie sent me in June of ‘93 occupies a special spot above my writing desk to remind me of the longevity and permanence of the written word and the impact what we write can have on the world. I just read the note before writing my first thoughts for the New Year. I am again humbled by Carl and Annie’s “unfailing grace and generosity”, their words they attributed to my work re: their beloved character of Ellie Arroway, and her journey to the center of the galaxy. 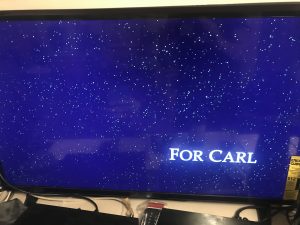 The film was released in 1997 to mixed reviews and box-office. Now, almost 25 years later, Contact is hailed as a landmark in Syfy films, a milestone in VFX and CGI breakthroughs, not to mention Jodie Foster and her bravura performance as a female hero by any standards before there was a movement to ensure more women in front of and behind the cameras.

As I watched the film and all its 90’s earmarks [no iPhones, no iPad/tablets, even President Clinton which dates the film, etc.] I marveled at the innovative use of CGI in practical settings, and the still amazing trip across the galaxy, another potent example of the power and longevity of the written word in this writer’s journey.

In 2012, while running an eQuinoxe writing workshop in Wellington, NZ, my team and I were treated to a tour of WETA, the legendary FX house and creature shop started by Richard Taylor and his wife in 1987, that came into world prominence with Peter Jackson’s Lord of the Rings trilogy.

The big surprise was that Richard Taylor himself was going to give us the tour. Wow!  Completely unexpected. But what happened next was an even bigger surprise. Richard asked me to join him in his office, just the two of us. The small office was jammed with creature models made from kits and from scratch by him and his wife over the years. This office was where WETA started and had since expanded taking in several adjacent buildings in an industrial area south of Wellington. I noticed a Dracula model of Gary Oldman as the Red Knight and felt honored.

Nope, that’s not the big surprise.

Richard wanted to tell me a personal story before taking me on the tour.  I will use signpost categories from the HartChart toolkit and story mapping tool to illustrate the tools apply to real life as well.

WETA’S TOP OF THE MOUNTAIN

Before Lord of the Rings made WETA famous, they had a chance to leap from a small FX house to a major player with a big-budget KING KONG remake Universal was planning.

WETA’S POINT OF NO RETURN

Richard starting  hiring artists, and craftsmen and digital and CGI talent from all over the world on 2-year contracts, most of whom would re-locate to NZ to live. WETA’s financial commitment was substantial.

Then Universal pulled the plug on the project leaving WETA in a desperate financial situation and facing bankruptcy on the brink of a game-changing film.

It was a phone call from Steve Starkey, Bob Zemeckis’ super-producer with an offer Taylor could not refuse. Having heard what had happened with the Kong film, Starkey offered WETA 400 special FX shots/sequences in a film in prep for production at Warner Bros that Robert Zemeckis was directing and starring Jodie Foster; Contact, based on Carl Sagan and Anne Druyan’s novel.

No bankruptcy. WETA makes good on its contracts. Contact is made.

Richard Taylor and Company flourish and achieve legendary status with Lord of the Rings and finally, King Kong in 2005, and many, many more.

Richard made it clear to me that if I had not written that first draft of Contact that attracted all the talent [including writers Michael Goldenberg whom I share credit with, and Menno Meyes who should have gotten credit] that got the film made, WETA might have gone under, and he and I would not be having this astounding conversation.

Then, he led us through his amazing, rambling, inspiring tour of WETA, the fx house that Contact built, if I may be so self-aggrandizing for one brief shining moment.

When my services on Contact were completed [the then head of the studio disliked my drafts because it had “math” in it] my Contact producer, Lynda Obst, who is responsible for much of my success, and is also my nemesis, entrusted me with her most important project, The Hot Zone, based on the New Yorker article, Crisis in the Hot Zone, by mega author, Richard Preston.

This was 1993. I again was privileged to work with real-life hero’s, Col. Nancy Jaax and her husband Colonel Gerry Jaax, who dealt with lethal pathogens every day including the Ebola outbreak at a monkey testing facility in Reston, VA, and the legendary field Virologist, Karl Johnson, who discovered and isolated the Ebola virus in Africa in 1976.

Jodie Foster attached herself to play Nancy Jaax on my first draft. After several writers, including me returning multiple times, director/actor conflicts, the project was canceled and Jodie jumped immediately to Contact, which was going into prep with George Miller to direct.

The Hot Zone sat on the shelf at Fox for 22 years until I resurrected the project as a limited TV series in 2014. Obst took over and 5 years later, after several directors, 17 writers, and a talented, cast, the series debuted on NAT GEO in 2019 and broke rating records for the broadcaster. I was awarded “Created by” and multiple writing credits on each of the 6 episodes for work I did in 1993-94 and then again in 2013-14.

What we write in the past does last, and has an after-life that can impact the future – yours and mine.

More pudding proof – as of November, two China-centered scripts I wrote in 2010 and 2016 that were abandoned by the Chinese partners are now on a fast track for financing by another China UK finance company. Fingers and wings crossed.

“Never Grow Up! Never Give Up!” 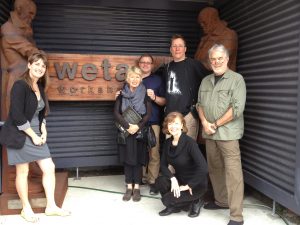 A NOTE ABOUT THE TITLE OF THIS NEW YEAR INSTALLMENT

The blend of rock music and a full orchestra [The London Festival Orchestra] with concept songs about the life of an everyday man delivered iconic songs including “Nights In White Satin”, “Tuesday Afternoon”, that still resonate today with me in my senior writing years, even more so with age, in contrast to the brash young anti-war activist, film rebel asshole I was.