“…a moment when you suddenly feel that you understand, or suddenly become conscious of, something that is very important to you.”

Have you noticed epiphanies occur at the most unexpected moments, places and situations? They certainly do for me in this writing life. Our characters in our stories also need to experience epiphanies in their journeys they take our audiences on, hopefully to a satisfying ending.

Here are three examples of Good, Bad and Ugly Epiphanies in memorable films:

To Kill a Mockingbird; Scout has a huge epiphany when she learns that Boo Radley has been her and Jem’s Guardian Angel instead of a potential threat and danger. Boo is the one who saved Jem and Scout on their spooky walk home in her Ham Halloween outfit. We think it could be Boo who attacked them — but he saved them. The gifts left for them in the old tree were from Boo. This quiet gentle man is not the boogey man next door – but the best friend they could have.

The Empire Strikes Back; Luke is slammed by his penultimate epiphany that Darth Vader is his father. Talk about “a moment when you suddenly feel that you understand, or suddenly become conscious of that is very important to you.” –  That’s right, Luke, DarthfuckingVader is your blood father!!!! Deal with it. Use the force! And watch out for that dark side thing.

Another epiphany, last one – promise. Jordan Peele’s diabolical, unnerving, “Get Out”. Chris, in his effort to Get Out!, gets slammed with the realization that Rose has brought many black men to her family home as evidenced by the box of photographs he discovers. Rose is not the love of his life and devoted to their future together, nor is she going to Get Out with him. As she stands there dangling the keys in her hands with same innocent smile on her face we see in the opening intro to her shopping for pastry, Chris has a deadly epiphany – he’s been had. He should have fled after the first night.

We writers need epiphanies in our lives as well. Revelations, enlightenment, bliss hits, signs from the cosmos, guiding lights, breakthroughs that keep us going, prompt course corrections and changes — in life, and in story.

I had a profound revelatory epiphany in Puglia, Italy during a most rewarding workshop. The Puglia Film Commission funded and allowed me to organize a dream program for writers and producers; 16 writers from around the world, including 5 from Italy, 5 weeks in Puglia, a most beautiful part of Italy – 3 weeks session 1, then a month off to revise the scripts, then all return for 2 weeks to polish and prepare pitches for 40 international producers in Bari, Italy.

During the first sessions, we bussed to a new city each week along the Adriatic coast, staying in Bari, Lecce, Vieste, with location trips twice a week arranged to reflect locations, customs, events that related to each script at the workshop. A luxury for writers to see locations and events that relate to their specific creations.

The other luxury was the advisor team I was allowed to assemble, which included legendary story Guru, Chris Vogler [The Writer’s Journey and Memo from the Story Department], Dawn Prestwich and Nicole Yorkin, a prolific TV writing team [The Killing, Zelda, and many more], David Magee, academy award nominated writer for Finding Neverland, Life of Pi, etc., and long time friend, the formidable Claire Dobbin – head of the Sydney International Film Fest and legendary script editor – a dream team for aspiring writers to have as mentors.

So where is this personal epiphany I keep talking about?

It happened in Polignano a Mare; Click Here — a pristine village on the Adriatic coast just south of Bari. We traveled there, writers and advisors, on the last day of the workshop. Check out the link for views of this charmed village by the sea. Polignano’s claim to fame is singer Domenico Modugno, who originated the popular Italian love song, “Volare”, long before Dean Martin made it famous.

But I found another bigger Iconic claim to fame for this perfect place. The village was spotless as we walked through the narrow winding streets, taking in the shops and the scores of children racing about in costumes, as it was their Mardi Gras. No trash, no rubbish of any kind appeared on the cobblestone streets. Not even a cigarette butt. And they do smoke in Italy. Nothing marred by graffiti – rare and pure indeed.

Each winding path inevitably led to a dead-end terrace overlooking the Adriatic and its unique shade of blue. Antonio, our uber location manager, directed us down one walkway to a killer view of the Adriatic. And there, painted in Italian on an old wooden door, was the only graffiti we had seen on the entire tour. I did recognize a name in English that spiked my interest –

“Mark Twain”. What was his name doing here in Italian graffiti marring this centuries old village? Twain [Samuel L Clements] is one of my literary deities [the other being Robert Louis Stevenson] not only as the prolific author, but as the traveler and adventurer lifestyle he lived to the max. Did you know Twain was the only man Tesla allowed to shake his hand? But that is another story.

“Mark Twain stood on this spot and declared that Polignano is so beautiful it must have existed before creation….”

Because I am a Writer….

Being a Writer brought me to this place and moment in time. I would never have had this experience or come to this place if I were an accountant, lawyer, insurance salesman, etc.

Being a Writer brought me to Twain’s house in Bermuda where he wrote “The Innocents Abroad”.

Being a Writer is the reason I spent 2 years working closely with Carl Sagan and Anne Druyan on Contact.

Being a Writer is the reason my family was invited to the home of Francis and Ellie Coppola, where he personally cooked past for Julia when he intuited she did not eat meat.

Being a Writer delivered our son, Jake, and daughter, Julia, to the set of Hook, and Steven Spielberg, and Bob Hoskins, and Robin Williams, and Caroline Goodall and, Dante Basco – a film I wrote which was inspired by Jake Hart, who asked the question, “What If Peter Pan Grew Up?”

Being a Writer is the only reason Kermit and Miss Piggy would even consider allowing me on set, much less giving me the time of day. What an honor to serve with Muppet Royalty.

Being a Writer is the reason I was introduced and spent quality time with unsung heroes, Col. Nancy Jaax, Dr. Peter Jahrling, and the legendary field virologist, Dr. Karl M. Johnson, and the many brave men and women at USAMRIID during my research for The Hot Zone.

Being a Writer is the reason I was invited to participate in the Sundance Labs and meet and become friends with my writing heroes, like Frank Pierson, and Stewart Stern. It is also the reason I have been invited to the Austin Film Festival celebrating writers for the past 26 years of its existence, where the HartChart was born.

Being a Writer has given me access to talents, amazing people, stories, opportunities, challenges, and yes, epiphanies….Too many to count.

As I was writing this love poem to Puglia, I received 3 independent messages from colleagues from out of the blue, each longing to relive the experience we had in Italy as Writers.

“Writer” should be capitalized, always.

Thank you, Mr. Twain, for this shared moment in time. Thank you, Polignano a Mare, Province of Bari, Puglia, Italy and all of us who stood in that spot together and are part of this Writer’s life forever…maybe even before creation. 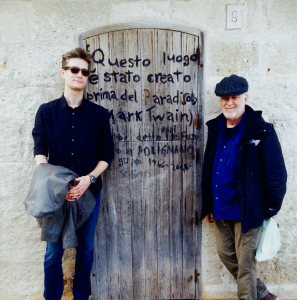